Roll your mouse over the numbers on the Map of Angelus to locate points of interest featured in the Lockie Leonard television series.

Like Angelus, it’s small and crummy looking. Mrs Leonard had hoped for a two car garage, but all she got was an outdoor dunny. A big old fibro joint with a rusty tin roof; it’s a real copper’s house. Sarge thinks it just needs a lick of paint and some curtains, but Mrs Leonard isn’t convinced. It goes all higgledy-piggledy inside, like whoever built it was a complete idiot. The wall paper heralds from the 1970s, the floor creaks, the bathroom has mouldy walls and one day it will all slide into the swamp and all that will be left is a TV antenna sticking out of the mud.

Lockie’s house is built on swampy ground next to the showgrounds. The whole street is really just swamp and more swamp, with lots of reeds and a few factories. It was the worst street in the whole town. There were frogs in the swamp outside his window and Lockie figured that one day the crummy old house would sink into the slime.

Egg’s place looks like a bomb site. The house looks pretty normal from the outside, but inside and out the back it looked like a terrorist attack. Everywhere you look there is sheet-metal, steel, copper pipes, angle iron, aluminium tubing, rivets, tanks, and car parts. In the backyard, past the huge rusting racks that hold the steel sinks and baths, car bodies and parts, there is big open shed for Mrs. Eggleston’s wielding.

Egg’s room is parent-proof; it’s the original Heavy Metal den. The walls are black and smeared with posters of Anthrax, Steve Vai, Megadeth, Iron Maiden, Judas Priest, and his bed is strewn with CDs and records of bands like Living Colour, Alice in Chains, Fishbone, Galactic Cowboys. In one corner on a silver stand there is a guitar, and beside his bed is an amplifier all kicked and scuffed and black. His room stinks of socks and lost undies, underarms and zit cream.

It is the big house on the hill – all money and no taste. Vicki’s house has a pool, a triple garage, landscaped gardens and two storeys full of shagpile carpet. Climate controlled and air-conditioned, it has a big stereo, hundreds of DVDs and CDs, a piano the size of a truck, big fat recliner-rockers and a giant TV overlooking it all. Upstairs, all the bedrooms have balconies that overlook the entire town, and a room devoted to a pool table.

The church is up on the opposite hill from the school. You can see Angelus High from the car park. It was squat and white and ugly as sin, like a squash court or medical centre. As with most churches, it smells like incense and floor wax. There was a banner behind the pulpit that said ‘ Salvation’

Situated up behind the pine forest, it’s a sagging weatherboard joint where the grass grows as high as the windows. There is a tunnel from the letterbox to the front door, a sort of jungle track in the grass. From the big wide verandah, that looks our across the whole town, you can see the junk lying around the yard: a busted lawnmower, a garden gnome without a head, a stack of old newspapers, a surfboard. It has a weird aroma, kind of like damp socks, cigarette smoke and burnt toast all mixed in together.

Up the hill from the town, Angelus High School isn’t anywhere near as ugly as the high schools that you see in the city. This place is old. It looks kind of dignified. Out the front, at the edge of the sloping lawns, there are hedges clipped in the shape of animals. It smells like squashed bananas, urinals, and Bunsen burners, even during the summer holidays. It seemed to hang over the town.

The hospital looked like a great blind, ugly giant with a car park like a wasteland. The front entrance had big automatic glass doors. Inside it smelt like antiseptic and Listerine.

War forts (war memorial, bronze soldiers are near by, within the pine plantation on Mount Clement)

The old war forts are dark and smelly, with only shafts of light for visibility. The passages are blocked up with steel mesh, and the floor is littered with wood from old campfires and bits of old clothing and bottles. At the top there was a war memorial – a couple of bronze soldiers looking brave and worried – and from it you could see for kilometres in every direction.

The sales yard was dotted with a hundred tiny flags.

The Zig Zag was the kind of street that a true space-case could design. It was only a hundred and fifty metres long but so steep and hair-pinned. The Zig Zag ran like a ragged lightning bolt down the harbour side of Mount Clement and ended up in a T- junction. On the other side of that junction was a slope of thick bush and trees all the way to the septic shores of Angelus Habour.

The south coast has a lot of good beaches, and some great surf. Sectioned off by large dunes and granite cliffs, the sea is usually fairly pumping. The water is grey and alive with huge bending swells that line up regular as corduroy. They crack against the headland, surge past the harbour and charge in to the bay. It’s demented out there. At sun down, the water glistens orange as it rolls towards the beach.

The harbour, in the middle of town, stank of algae and effluent from the woollen mills, and the breeze brought up farty gusts of it. It’s rancid and still, chocking on algae and poison. The shallow end of the Harbour is dotted with half-sunk dinghies and riverboats with mountains of bird poop growing on them. Every so often there is a submerged pram or a few tyres. On the surface, schools of plastic bags float gracefully. It really stinks. Even in the deeper water there are no fish.

Near the fertilizer factory and the wool-mill, a huge pipe pours pollution into the waterway. There is an algae-choked bank with dead crabs and fish snagged in reeds that are thick with algae.

Mount Clement is basically a really large pine plantation. Up past the pine forest there are boulders, scrub and native trees. From the top you can see for kilometres in every direction: the town and the harbour, and the beaches stretching eastward; even the little islands dotted out in the sea. 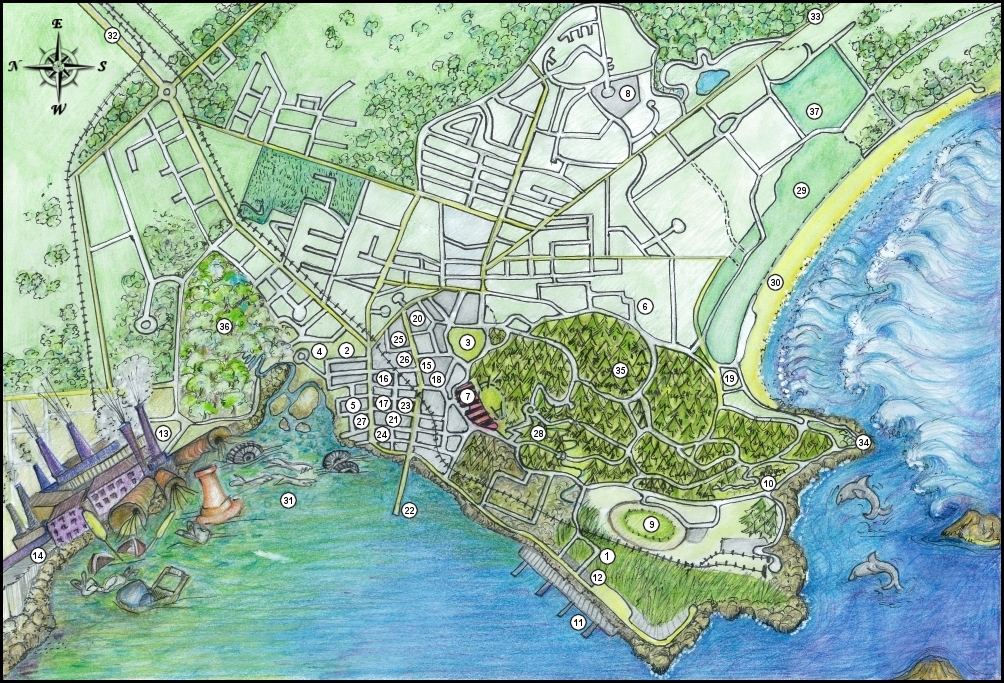